About The Author
Mike Hammersley was born in the borough of Bury when it was still in the county of Lancashire, England.

His family moved to the leafier suburbs of neighbouring Cheshire when Mike was still at school and it was here that he forged new friendships and discovered hobbies that would last a lifetime. Mike's general love of history was further inspired by the arrival of the American Civil War bubble gum series which led to an enduring interest in America's bloodiest chapter. This enthusiasm for collectng cards would later translate into Living History and participation in re-enactments both in the UK and the USA.

At an event commemorating the125th anniversary of the Battle of Gettysburg, Mike met a group portraying the 13th Alabama Infantry Regiment and thirty years on he is still proud to count its members as some of his closest friends.

By day, Mike made a career in Information Technology where writing documentation, journals and proposals to demanding deadlines prepared him well for the life of an author.  Working  into the small hours of the morning to get the words down on paper just goes with the territory.

Now that Keeping Dixie and Field of Stones have reached the shelves, Mike feels he has reached a point where he is able to combine his enduring historical interests with the desire to tell a great story.

He is supported in his endeavours by wife, singer/songwriter Jools Hammersley, several grown-up children and a large ginger cat, but that's a tale for another time!

Coping with life's vicissitudes is a team effort! 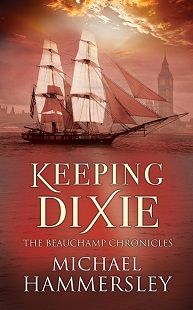